I love mayonnaise. And homemade mayonnaise is just so much more loveable. We’re talking eat-straight-from-the-jar kind of love here, which is precisely why I hardly ever make it! I had never bothered making mayo in my pre-Thermomix life, it was well and truly in the ‘too hard/too fiddly’ basket. But not anymore!!!
There are a couple of reasons Thermomix makes mayo so much easier:
1) Blades spin on their own (i.e. you don’t have to hold onto the egg beater or whisk and beat for your life, so you have more control over the oil with two hands)
2) Blades spin much faster than you could whisk by hand, so it emulsifies more quickly, more evenly and more successfully
2) That wonderful little measuring cup. Held just above the hole in the lid by those little round ‘feet’ around the lip, the MC creates a small gap for the oil to drizzle slowly through. So, if you do accidentally rush with the oil, it’s not the end of the world because the MC will stop it from gushing down all at once.

Now, Thermomix or not, mayo can still be a bit stubborn. I will readily admit to you all that I have had a few flops. Not a drama, flopped mayo can be recycled (simply start with another egg, and use the runny mixture in place of the oil to give it another chance) or re-purposed (just use it as a creamy salad dressing). Usually the biggest problem is if the ingredients are not all the same temperature (room temperature), including the Thermomix bowl. And even though I menu plan, I still struggle to remember to gather everything an hour early so that all ingredients reach the same temperature. And then, due to differences in materials and how well they conduct heat (or something like that), often one thing is just ever so slightly hotter/colder than another thing. And, FLOP!

At some point over the last 18 months, something just went ping! in my head. Duh, Sarah – you have an amazing machine that can heat while the blades run… and, better yet, can heat to a mere 37 degrees. Why, that’s practically room temperature!

And thus, my cheat’s mayonnaise was born. Haven’t had a single flop since I started doing it this way. 🙂 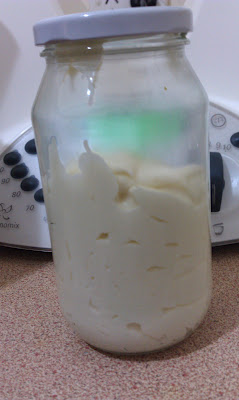 Cheat’s Mayonnaise
Ingredients:
1 clove garlic
1 egg (I don’t separate the egg, I use the white and yolk together from the start)
pinch of fine sea salt
1 Tbsp apple cider vinegar (preferably raw, unfiltered)
250g macadamia oil (weigh this into a pyrex jug or something with a spout before you start making the mayo; macadamia oil is the most nourishing of your typical mayo oil options; grapeseed oil gives a great flavour and texture but is much more highly processed)
Method:
1) Put garlic in TM bowl and chop 3 seconds on speed 7. Scrape down the sides.
2) Insert the butterfly. Crack the egg into the TM bowl, add salt and ACV. Mix for 1-2 minutes on 37 degrees, speed 4. The time it takes to reach 37 degrees will vary based on how cold your ingredients were to begin with. You don’t have to wait the full 2 minutes – stop whenever the 37 degrees light stops flashing and becomes constantly lit.
3) If you stopped early in step 2, be sure to zero the timer (press + and – at the same time), and press the power button (just press, don’t hold down) to turn the temperature setting off. Then set the timer for 6 minutes.
4) With the butterfly still in place, turn the blades on to speed 4. With the blades running and the MC inverted, begin to slowly pour the oil onto the lid. Try to pour at a relatively steady pace (don’t stress too much though, the MC will compensate for any over-enthusiasm with the oil), and take almost the full 6 minutes to add in the oil. Let the blades run for another 10-15 seconds after all the oil has gone in.
5) Bottle and enjoy!!!!

This makes a lovely light mayonnaise (in texture and flavour) that goes really well with just about anything! Enjoy! And don’t be afraid to ask questions if you need mayo tips. 🙂 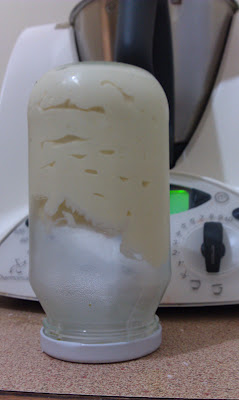 I was telling everyone on my Homemade, Healthy, Happy facebook page that the batch of mayo I made on Thursday was the best batch so far – I had held it upside down for ten seconds (until I got too nervous!) immediately after putting it in the jar. I took this photo the next day, after it had been sitting upside down on the bench for a good 30 seconds. Pretty good stuff! 🙂

For dinner tonight, we had smoked salmon coleslaw with preserved lemons, using the delicious homemade mayo. 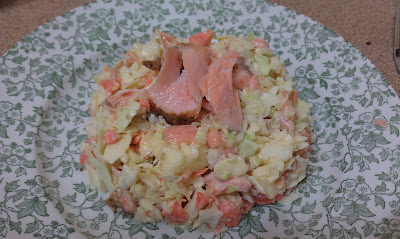 Put 1/2 a preserved lemon (skin only, no flesh) in TM bowl and chop for 5 seconds on speed 7. Proceed with coleslaw recipe from EDC. Toss through some shredded hot-smoked salmon (droooooool, we have such awesome produce in this wonderful country!), and add some extra hot-smoked salmon on top. It was amazing! We needed a light dinner, as we had pumpkin soup with bone broth for late-lunch, and torte caprese for late afternoon tea. This would go down an absolute treat on a hot summer’s day, but was equally amazing and just what we needed tonight.
P.S. I am obsessed with this plate! Picked it up at the thrift shop for just a couple of dollars, and it is just so darn cute and so very ‘me’! Okay, I bought three of them… 😉