At the end of June, I worked at the Sydney Good Food & Wine Show for The Cheesemaking Workshop. We had a stall in Cheese Alley and I spent three days surrounded by some of the best cheesemakers (and the most delicious cheeses!) that our amazing country has to offer. It was madness, and it was bliss. 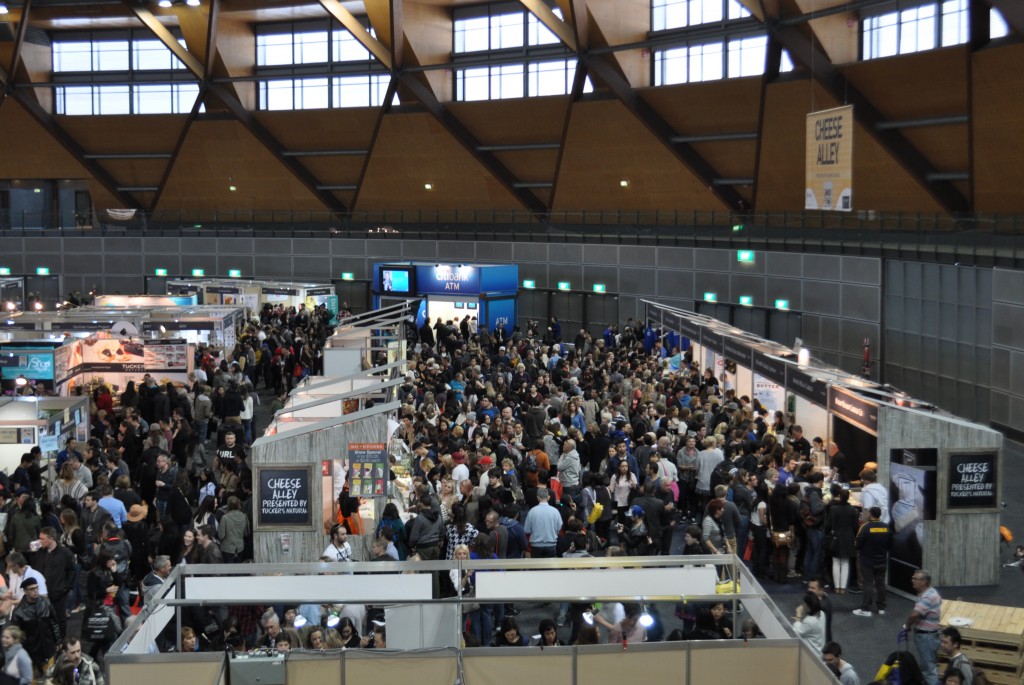 Among those cheesemakers was Bruny Island Cheese Co. Headed by Nick Haddow, Bruny Island Cheese Co makes a range of incredible artisan cheeses. Cheese for the true cheese lover, each cheese has a history and tells a story. Click here to check our their cheeses and see what I mean. It’s very inspiring stuff!

You’ll notice on that page, that Bruny Island Cheese Co does a raw milk cheese! Nick Haddow has spearheaded the raw milk cheese movement in Australia, and he is currently the only cheesemaker in Australia producing a raw milk cheese. So naturally, I just HAD to talk to him. I grabbed a moment of his time at the show, and here is what we chatted about… 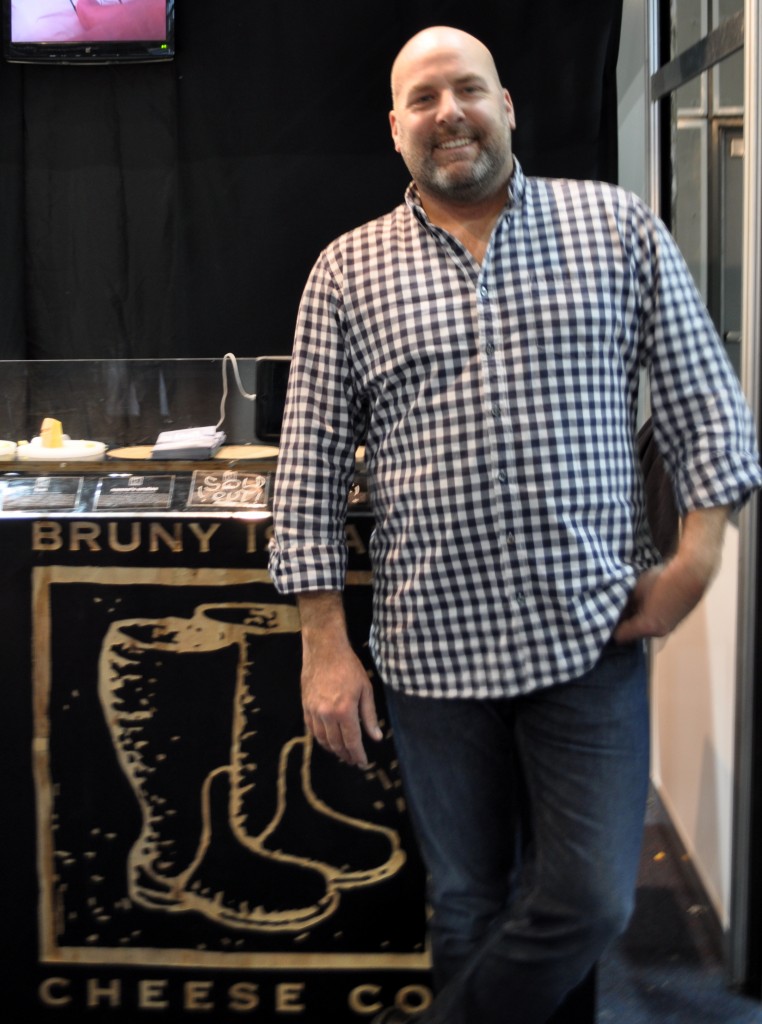 S: To start with, tell us a little bit about you. What led you to cheese making?

N: I had a childhood that was full of rich food experiences, a family where we make everything from scratch with a big winemaking influence there as well. I did hotel management, which led me into running restaurants and from there I kind of did it back to front… I went from front-of-house into the kitchen. I was cooking commercially, and that led me into a fascination in not just cheese but traditional foods (charcuterie, cheese, wine, beer, the whole catastrophe).

S: So is there any one defining cheese moment in your life? A memory from childhood, or one moment where you just went “wow”?

N: Most of my cheese memories from my childhood were all of kind of terrible cheese. Thirty years ago that’s all we ate in Australia! That said, a cheese platter was always a vital part of any entertaining my family did, despite the quality of the cheese. I’ve got hundreds of defining moments! I can remember almost every cheese I’ve ever tasted. The first cheese I made was a goats milk white mould cheese when I was working in the Barossa Valley. A cheese that brought me to my knees was a cheese called Reblochon in France. Making cheese at an alpine alpage in the French Alps at two and a half thousand metres high was a defining moment. A whole heap of stuff fell into place for me there.

N: I don’t know! I get asked that a lot. I make the cheeses that I love to eat. I’m fascinated by washed rind cheeses, cheeses made at high altitude, cooked curd cheeses… blue cheeses are incredible in a whole different way. I don’t have one favourite one, and I’m pleased that I don’t. I don’t want to close off any doors.

S: Do you have a favourite cheese to make?

N: Cheesemaking to me isn’t something that happens in a vat. To me, the art of cheesemaking is actually what happens in the maturing room, not so much the vat. In the vat, it’s all variations on a theme. It’s like baking a cake, in a way; it’s formulaic, it’s repetitive, it requires care and attention and a lot of intuition as well. But what happens in the maturation room is… amazing. It’s what turns something that has very little personality into something that, weeks, days, months or years later, can be ridiculously delicious and character-filled. It’s also where you stuff it up as well.

S: Tell us a little bit about the battle with raw milk cheese and getting a cheese approved for raw milk cheesemaking in Australia. What did you have to go through?

N: Well, it took about four years and I guess it was the result of just being pigheaded about it. To me, there is no other form of cheesemaking that interests me other than cheese made with raw milk. To me it’s the true expression of my craft, so why wouldn’t I want to do it?! Underpinning that approach to raw milk is also a belief that the current regulations are deeply flawed and wrong, dangerously wrong. They take the assumption that all milk requires pasteurisation, and that’s fundamentally untrue. And that therefore you cannot make raw milk cheese safely in Australia – that is also fundamentally untrue. We have some of the best, cleanest, safest milk in the world. What I’ve been able to do, hopefully, is prove that we can make raw milk cheese in Australia safely. But it’s a very complex argument. A lot of people hold up the argument of flavour and quality, that that’s why you should make raw milk cheese, because it tastes better – that’s crap! It’s a flawed argument. Raw milk cheese does taste better, but I’ve eaten plenty of bad raw milk cheese. Like organic produce – it doesn’t mean that it’s better, it’s just got a different level of integrity. To me, it’s more about an expression of what I want to do, of how I want to leave the industry.

S: You mentioned your interest in traditional foods, does that come into play with the raw milk as well?

N: Absolutely! Cheese is something that’s been made for hundreds and hundreds of years. It frustrates me that cheesemaking changed a lot in the last 50, 60, 70 years. What I’m trying to do is get back to the way cheese used to be made and used to be sold.

S: When you were establishing your raw milk C2, did you have to work within existing legislation, or did anything change as a result of your efforts?

N: No, there is existing legislation which allows for the manufacture of hard, cooked curd cheeses in Australia using milk that has undergone what they deem as ‘pasteurisation equivalents’. So, the four factors that are important to that are that the cheese is matured for a long time (a minimum of 6 months), that it’s matured above 10 degrees which allows for acidity development in the fermentation room and a secondary fermentation to occur which prevents pathogenic bacteria getting established, it also requires that the end cheese has a moisture content of less than 38% moisture, and the fourth one is the cooking of the curd which has to be above 48 degrees. That’s being reviewed.

S: What are you hoping for that temperature to come down to?

N: I would like them to start from scratch! Because for me, the answer in Australia is not to say, “Okay, anyone who would like to make raw milk cheese can now make raw milk cheese.” It would be a disaster! The reality is that most cheesemakers haven’t been doing it for very long in Australia and a lot of them don’t even want to make raw milk cheese. The worst thing would be to have the market demanding that they do something they don’t want to do or are unskilled to do. What I would prefer FSANZ to do, and I suspect that this will be what happens, is to take a case-by-case scenario. So as a cheesemaker, I go to my local regulating body and say, “I want to make this, this is how I’m going to do it, and I think I can do it safely because…” and they should take into account the person, whereas at the moment they don’t. To me, that’s a much better situation, it’s sensible. What we have at the moment is not sensible. Even just applying those four rules aren’t sensible. To say the curd has to get to 48 degrees is moronic unless you say it has to get to 48 degrees and be held for ‘x’ minutes. To have a temperature without having a time/temperature ratio, it’s dangerous! To not talk about curd particle size, it’s crazy! These are all things that need to be talked about to have these conversations about making raw milk cheese. You need to talk about if you’re brining the cheese, if you have segregated brine, segregated maturation… none of that’s in the current framework, but they’re all things that should be asked if someone comes to them and says, “I want to make raw milk cheese!”

S: Raw milk cheese… It’s tradition, it’s integrity, it’s the art of cheesemaking. Is it to do with health at all for you?

N: Couldn’t be less interested – to me, it’s about pleasure. Which is health in a different way.

S: If there were any of your cheeses (aside from the C2 which is already raw milk), that you could make & sell using raw milk, which one would it be?

N: If I could only pick one, it’d be 1792, which is a soft cows milk washed rind. Because that’s the sort of cheese that they’re most freaked out about! And to be able to put that in front of them and say, “Look, even that can be made safely” proves a great big point. Cheeses like that are made out of raw milk safely around the world all the time. It’s a cheese which is way more prone to the growth of pathogenic bacteria than C2.

S: Did it take much to find a producer of raw milk that you were happy with down in Tasmania?

N: No, not at all, really. To me it starts and finishes with quality, but also factoring into that is the size of the farm, how they treat their animals. One of the farms that we deal with (we deal with two) is a very small farm that, I think it’s fair to say, would be economically unviably without partnering with someone like us because we pay a premium for our milk. I like dealing with small family-run farms. And the milk is awesome as well.

Fascinating stuff. I loved hearing Nick’s vision for the future of raw milk cheesemaking in Australia, and the legislations around it. And I really loved his stick-it-to-the-man attitude when I asked which cheese he would most like to make with raw milk. Best answer ever.

I hope you all enjoyed hearing from a master cheesemaker, and a true raw milk inspiration! Be sure to head over to Bruny Island Cheese Co to peruse their delicious cheesy menu, and don’t forget to check them out on facebook too.