Most of you will know that late last year, Tyler was admitted to hospital for 3 days and received 48 hours of IV antibiotics plus a course of oral antibiotics (click here to read more). You have all been so supportive (thank you!!), and many of you have been interested to know his progress, so I wanted to give you all an update – besides the fact that he got a haircut and has learnt to tie shoelaces!! 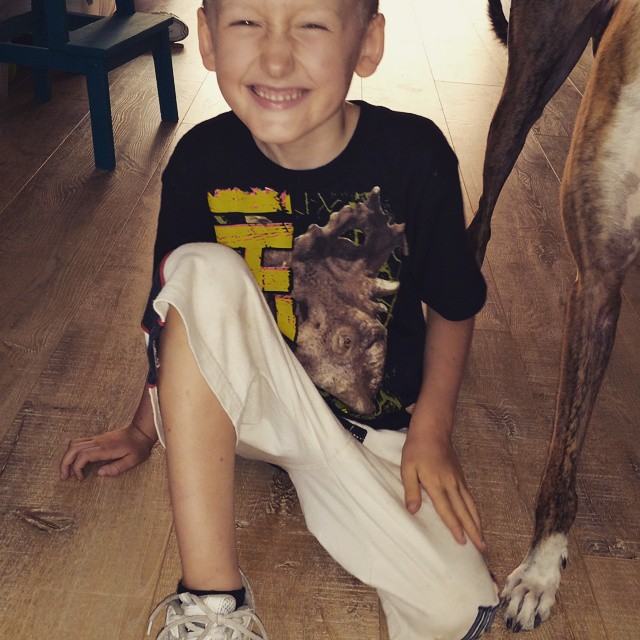 I got through our hospital experience by ignoring the voice in my head telling me how much damage the antibiotics were doing to his body. I had to. Antibiotics have their place, and they were well and truly needed in Tyler’s scenario. But after we were back home, it became clear to me just what we were facing as a result of the antibiotic onslaught.

Diarrhoea – well, that one began in the hospital. Stomach cramps. Increased sensitivity to foods and other triggers. And, despite the doctors telling me his liver was fine and that the first sign of liver issues would be yellowing of the whites of his eyes, I noticed yellowing of the skin on his hands, knees and feet. I actually noticed this change while we were still in hospital, and mentioned it to the doctors – but they weren’t concerned and didn’t want to follow up on it. I didn’t question it, they are the professionals after all, but I made a mental note that his liver would need extra love when we got out of there.

It is well-accepted that antibiotics put a strain on the liver; so much so that negative effects on the liver is listed as a side effect on the leaflet in the box – at least for flucloxacillin, our little frenemy for a week or so. So before I started any other recovery methods, I turned to food. Specifically, foods that promote liver function. In an ideal world, I would have done a whole bucketload of research about the best foods for liver function. But we both came home exhausted and overwhelmed, and so I figured – hey, if a whole bunch of resources all say these foods promote liver health, it sure as heck can’t hurt to dose up on those even if they don’t do a thing for his liver. So that was my initial plan. Lemon, leafy greens (chard, spinach, kale, broccoli, Brussels sprouts), garlic, and beetroot featured more heavily in our diet than they ordinarily would.

Here are some liver-boosting recipes and ideas:

Although I’m no longer noticing liver-y symptoms in Tyler, his immune system and digestive system are still all kinds of messed up. He has always reacted badly to mosquito bites, but his reactions have been worse (bigger, redder, angrier, more pus) since the antibiotics. And his food reactions have been both bigger and more generalised.

A little backstory: When Tyler was around 2 yrs old, he was diagnosed with something called ‘infantile eosinophilic pustular folliculitis’. The doctors described it, basically, as his immune system going into overdrive and producing too many of a normal immune cell which his body expels as fluid via a nasty rash. I was told it was not linked to or triggered by anything, and he would grow out of it. Well, he hasn’t grown out of it, and it is triggered by wheat (in his case at least). He has been largely free of this rash for a couple of years now – except for the odd fortnight or so following an incident of wheat consumption.

We’ll come back to this rash in a little while. So, the liver food focus began as soon as we got home. I knew there wasn’t much I could do for his gut until he finished the course of oral antibiotics, but I figured I may as well get a headstart on the liver love. So that was the big initial focus. Then a couple of days before the oral antibiotics course was due to finish, I added in a bigger focus on gut health – bigger than we’ve ever done before. We cut out grains completely again, and placed an even bigger emphasis on gut-healing foods (such as gelatin & bone broth, and fermented foods) than before the hospitalisation, and I even included *gasp* probiotics. Whilst I don’t believe that probiotics are necessary for maintenance of good health (assuming a balanced diet filled with plenty of fermented foods), I do believe that they can be very helpful, even essential, in healing from a health crisis. My preferred brand is Bioceuticals due to their strong research-based foundation, and Tyler is (still) taking this one and this one. We also cut out all sweeteners (including my beloved honey and maple syrup), but I have not placed any restrictions on whole fruits and we both eat plenty of fruits! Basically, keeping a super simple and trigger-free diet until things get back under control. Meat, eggs, dairy, and lots of fresh fruit and veg.

Now back to that pesky rash… Interestingly and frustratingly, a few days after finishing the oral course of antibiotics (just over a week out of hospital), Tyler came out in his pustular folliculitis rash despite not having consumed any wheat. Yikes. To me, that was a big sign that his immune system was not coping, and just totally freaking out. Which nailed home to both of us the message that keeping it simple in terms of diet was absolutely the best way forward for now. We went away just a couple of weeks ago, and Tyler had a very, very small amount of sprouted rye & spelt (which he was previously okay with) – but he broke out in his rash once more. He reacted to rye & spelt in the way that is usually reserved for wheat. I think we’ve got a long road to recovery ahead of us still.

But on the positive side, we’re both still here and we’re happy. It has been stressful on both of us, and I daresay it will continue to be. But after seeing the consequences of the antibiotics on his own body, Tyler has taken his recovery very seriously and he is more committed to and more responsible for avoiding potential triggers than I have ever seen or could ever have hoped for. I’m so proud of him for taking it all in stride and being so committed to a return to good health! And I have full faith that he will get there in good time. Thank you for all your support. You guys are amazing.