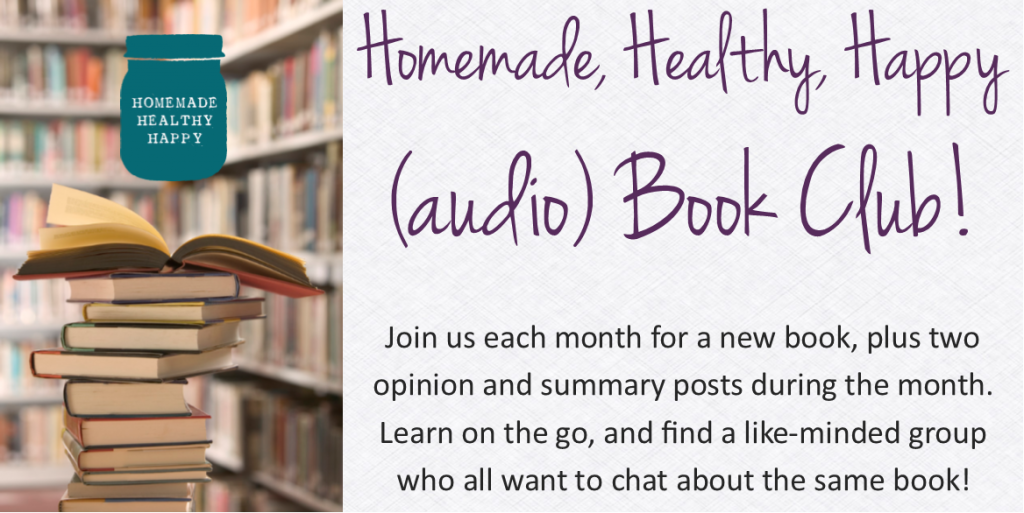 I am still just as in awe of Michael Pollan (and his book, ‘Cooked’) as I was when I first started listening to the book.

Okay, I kind of knew going into it that I would love it. Michael Pollan is sensible. The book was about traditional foods and cooking methods. If ever there was a book I was destined to like…

To catch you up to speed, click here for the first post announcing the HHH book club.

Cooked was about so much more than just traditional foods, which is what really won me over. It was about politics of food, about evolution, devolution, feminism, the stronghold of big corporations on the food industry, the little people fighting back, the incredible magic of a whole colony of microorganisms that we can’t even see yet can’t live without… and so much more.

The last two sections were Air and Earth. Air was all about bread. Okay, there was a brief mention of soufflé, but really – it was mostly just bread. I loved that Pollan actually went to see how Wonderbread is made. And it somehow both surprised and didn’t surprise me to hear that they use a truckload of yeast. Something like 10% of the weight of the loaf. That’s CRAZY. When you think most loaves have 2tsp (around 7g) to 500g of flour…!!!!!! That in and of itself is ridiculous, let alone all the nasties they add too. Pollan’s description of the flavour (or lack thereof) and gummy texture of Wonderbread was perfect.

And of course, hearing about Pollan’s descriptions of various sourdough bakers and their bread plus his own trials and tribulations in experimenting with sourdough, was just incredible. I consider myself a keen sourdough baker, but I don’t think I’ve ever given as much thought to the  process as I did while listening to the Air section of my Cooked audio book.

But I think if there is one take home message from the Air section it is how we have destroyed something as magical and nutritional as bread. Yes, nutritional. I don’t hate bread. I hate bad bread.

At some point, we took a perfect food (real, naturally leavened sourdough bread) and we had to make it faster. Cheaper. More accessible. Made by companies. And in doing so, we destroyed it. We totally changed the nutritional profile of bread. As far as I’m concerned, good sourdough and bad bread are two totally different food species. More unlike than alike. Michael Pollan says it more eloquently than do I.

And then there was Earth. Oh, Earth. Some think it’s kind of cheating that Pollan discussed microorganisms in two sections of his book (Air and Earth). I don’t. I see why he did it – bread is kind of the exception to the rule. Most fermented foods (discussed in the Earth section) are just that – Earthy. Sour. Pungent (not necessarily in a bad way). Controlled rot. Bread is so very different – uplifting and airy where other fermented foods are strong and grounded. They deserve to be in separate sections, and not because I think bread is better. Far from it, in fact. Same same, but different.

I think… and bear in mind that I loved the entire book and have a hard time choosing a favourite anything… Earth was my favourite section. Okay, so most of you probably could have predicted that. I honestly thought, going into it, that Fire would be. And certainly after listening to Fire, I felt even more strongly that way. But Earth just took me completely by surprise, in pipping Fire to the post.

There is always more to learn about fermented foods. Always. They are just amazing. A whole civilisation growing inside an airtight vessel. Digesting food for us as well as for them. We have an entire civilisation of microbes living inside our very own bodies. Pollan discussed co-evolution of microbes and humans (and raised some very interesting points about cultural evolution as well as biological evolution). And I really thought, more than ever before, about what we have to offer these microbes versus what they offer us. It strikes me that, while we do provide a home and food for these microbes, they do much more for us. I am convinced that without these microbes, we would not be. We wouldn’t be human, and we wouldn’t be at all. Microbes can live anywhere. In any species. On any surface (well, kind of). But us? We can’t survive without the microbes in our guts. We are so much more dependent on them than they are on us. Big shout out to the trillions of microbes living in my body at this moment!

If I can be a little bit brutally honest here… I was a little underwhelmed by the conclusion of Cooked. But I do feel that that was kind of inevitable. The book was so amazing, so jam-packed with stories and information and transformations that wrapping it up is an incredibly challenging and daunting task. I feel out of my depth even now, wrapping up a summary of the amazingness that was Cooked. I can only imagine how Pollan felt. Think of it like the act that comes on stage after THE act. The words, “How do you follow that?” definitely come to mind.

(This post contains affiliate links. An affiliate link is a link to a product that I love and that I think you will love too. I don’t endorse products unless I believe they are fantastic. Affiliate links don’t hurt, they’re not scary or spammy, they don’t try to sell you enlargements of certain body parts, and they don’t cost you anything. If you click an affiliate link and you like what you see and decide to buy something, I get a tiny little bonus at no extra cost to you. Affiliate links keep food on my table so that I can keep posting awesome stuff for you.)