After much googling and inspecting every health food store we stumble upon, we have FINALLY found a local store that stocks raw cows milk!!!! It was right under my nose all along, of course. And by raw cows milk I mean *ahem* “bath milk” which is strictly “not for human consumption”. That was loaded with sarcasm, frustration, resentment, disgust, you name it. You see, in NSW we have one of the most ridiculous laws I have ever heard – it is illegal to sell raw milk for human consumption. Just to clear up any confusion, raw cows milk is milk straight from the cow – unpasteurised, unhomogenised, unfrankenfoodified. Healthier and much more beneficial than pasteurised milk – in fact, I have come to believe that there is just no good reason to drink pasteurised milk. Why is it illegal to sell raw milk for human consumption? Something about food-borne illness, which is a terrible excuse. You see, making it illegal to sell raw milk for human consumption does nothing to prevent it being sold. You know what it does do? Encourage “black market” trade for raw milk, which is unregulated and leaves MORE room for mistakes and risks with food-borne illness. It also makes it more expensive, as companies selling “bath milk” need to adjust their prices to take into account the fact that there are less companies willing to stock it due to the high rish of incurring a ridiculously hefty fine. A good friend of mine, with similar views, made a good point this afternoon – we can legally be sold cigarettes which are virtually guaranteed to kill us… but we can’t be sold raw cows milk (unless it is “not for human consumption”)?!? We can also be legally sold “food” items with more numbers than real ingredients, which contribute to many health conditions… but we can’t be sold raw cows milk? Something’s gotta give! Why do I want to drink it? Well, it’s so much better for you! Any milk straight from the animal is alive… full of antibodies, good bacteria, enzymes, loads of good stuff. Pasteurisation, although it does kill off any “bad stuff” in the milk, kills off all of this good stuff too. But did you know that good bacteria actually fight off bad bacteria, because there’s not enough “room” for them both to exist harmoniously in the milk?? And pasteurised milk actually makes MORE people sick per year than raw milk?!? You can read all this stuff here for health benefits and here for safety. Have a browse of the whole site if you’re keen to know more about raw milk. The shopkeeper said “more power to the people!” when he saw how excited I was to find raw milk, and I couldn’t agree more! If the sale of raw cows milk were to be legalised and regulated, farmers would have to operate under very strict sanitary conditions and would be liable for enormous fines (and would likely be shut down) if they were found not to be following the regulations. This is the best way to manage the situation, rather than banning it and leaving room for dodgy farming practices. And change has to start somewhere, right? 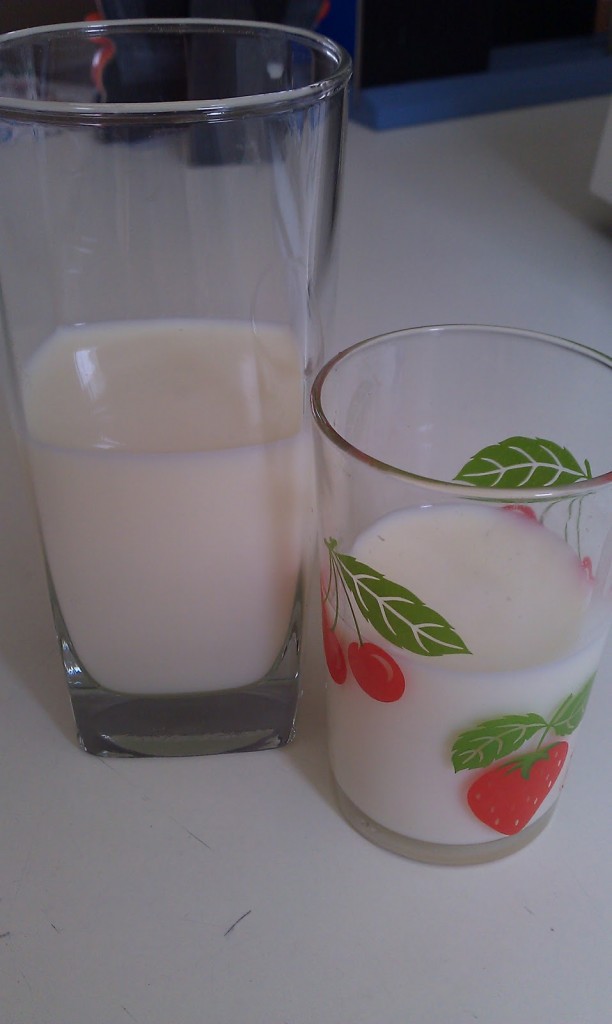 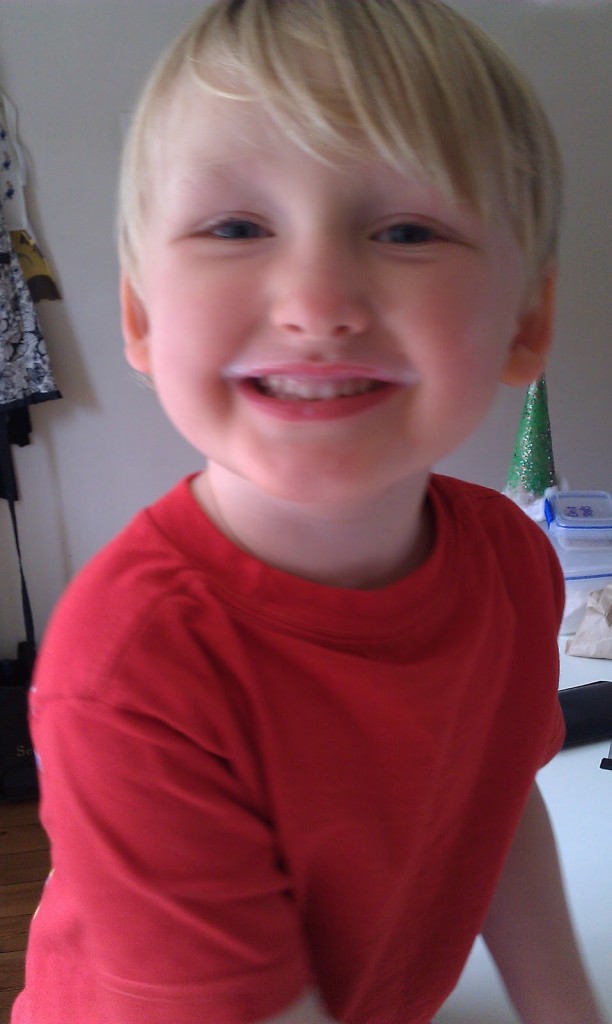 Anyway, we also found organic quark (a curd cheese, common in Europe) at the same shop and we’re almost as excited about this as we are about the raw milk! Such an awesome shopping trip, we were both practically squealing with excitement on the way home! We had dollops of quark on our vegetarian pizzas tonight, yum yum yum!!! 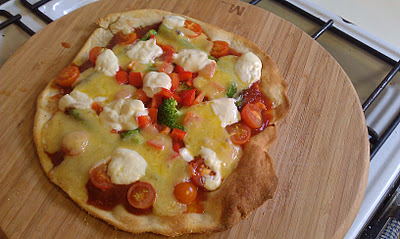 Hiding under all that cheese (whoops – Mr T always “accidentally” puts too much on; today was cheddar cheese and dollops of quark) is broccoli, capsicum and asparagus. I don’t use tomato paste, but instead make up a tomato pasta sauce to use (usually garlic, onion, tomatoes, and basil). You need to cook the dough first before you put the sauce & toppings on, as a sauce is more liquidy than tomato paste and more likely to turn the base soggy. We used milk instead of water in the dough this time, and it was even better than usual!!!
And just to get you all drooling, here is a picture of a dessert I have been working on, that I made tonight using more of those scrumptious donated lemons: 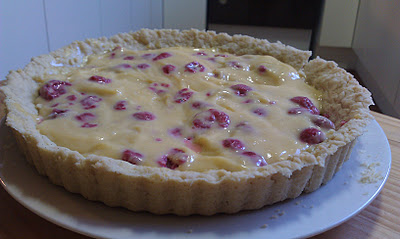 The recipe still needs just that little bit of tweaking, but once it is perfect I’ll put it online, of course.
This is not the dessert recipe idea that came to me the other day, though. That one is still very much in the planning stages, but I am SO excited for it! I just need a whole army to come and taste test it once I give it a whirl!
I hope everyone’s day has been just as exciting as ours! 🙂
P.S. If you are on the northern beaches and want to know where I found the raw milk, comment on this entry and I will figure out a way of private messaging you the info. The brand is “Cleopatra’s Bath Milk”.
« Everyone loves a good roast dinner!
It’s that time of the week again… »