I love bolognese sauce. I get pretty creative in the kitchen, and I hate having a set repertoire of dishes to fall back on because it’s just too boring to live life that way. Bolognese, poor bolognese, is one of ‘those’ recipes. One of those recipes that kids will eat, that is quick and easy, that has some meat and some vegetables and ticks all the boxes… You can see how it easily becomes one of ‘those’ recipes.

I also love vegetables. And meat. And tomato-y saucy things. And I love the depth of flavour in a good bolognese sauce. But I can’t have red wine.

Strike that. I can have red wine if I buy the expensive organic red wines that I use 150ml of in a dish, and then the rest goes off because I don’t drink and it doesn’t have preservatives to keep it from going off. I also can’t have white wine, and happily use apple cider vinegar as a substitute in cooking. But red wine doesn’t just add depth of flavour to bolognese – it adds that deeper red colour to the sauce too. ACV is certainly not going to do that for us. So I turn to another vinegar. A much less well known vinegar.

… Umeboshi vinegar.
What on earth is umeboshi vinegar? Umeboshi plums are a Japanese salt-pickled plum, and umeboshi vinegar is the sour and salty liquid that comes off the plums during the pickling process. It’s not really a vinegar as such, but it adds that mouth-puckering sourness or depth that vinegars do. And as an added bonus, both the plums and the vinegar have some great benefits for digestion, energy, and as an antibacterial boost.
Umeboshi vinegar is a deep reddish purple. Perfect for adding both the depth of flavour and colour into our bolognese sauce!

Umeboshi vinegar has been appearing in my bolognese sauces for at least 6-12months now. What hasn’t made an appearance until quite recently, is the next secret ingredient.

A couple of bolognese’s ago, I had an awful lot of spinach that was going to go awful in an awfully quick amount of time. It was crying out to be used. So into my bolognese sauce went two big handfuls of spinach. Hmmmm…. At this point, pre-spinach-blitzing, I imagined serving Tyler a green bolognese sauce. He’s a great little eater, but I knew that just wouldn’t fly.
Also in the vegetable crisper needing to be used was one lonely beetroot. Aha!!!! Perfect to offset the green of the spinach and get the bolognese back to a normal bolognesey colour! And thus the second secret ingredient was born. 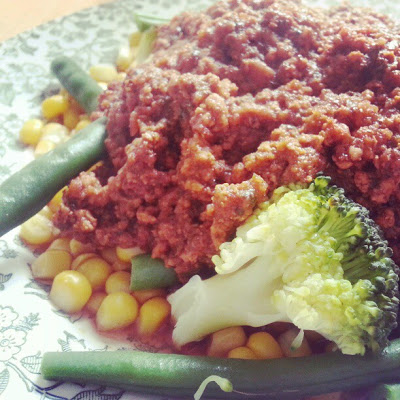 (We are very low-grain, so we eat our bolognese sauce on top of steamed vegetables.)

Bolognese SauceIngredients:
500g beef (or 250g beef plus 250g pork), cubed and partially frozen (or, if frozen, partially thawed)*
1 onion, peeled and halved
2-3 cloves garlic, peeled
30g olive/macadamia/coconut oil, or butter
2 stalks of celery, roughly chopped
2 big handfuls of spinach leaves
1 small-medium beetroot, peeled and quartered
1 carrot, roughly chopped
60g umeboshi vinegar
100g tomato paste
3 medium tomatoes, roughly diced
Method:
1) Weigh half the meat into TM bowl and turbo in very short bursts just 2-4 times until you get a coarse mince.** Set aside, and repeat with remaining half of the meat. Set aside again.
2) Don’t bother cleaning the bowl! Add the onion and garlic, chop for 2 seconds on speed 7.
3) Add oil and saute for 3 minutes, 100 degrees, speed 1.
4) Add 1 stalk of celery, all of the spinach and the beetroot. Blitz on speed 7 for 10-15 seconds, using the spatula if necessary.
5) Add in the last stalk of celery and the carrot, and chop for on speed 5, using the spatula, for 5 seconds or until the extra veg is finely diced (not pureed; I like to have some bits of vegetables in the sauce).
6) Add remaining ingredients and cook for 25 minutes, 100 degrees, reverse, speed soft. Check after 15 minutes, you may want to do the last 10 minutes with the rice basket on top instead of the MC.

*For an extra nourishing bolognese, mince 1 or 2 chicken livers along with the meat.
**The finer your mince, the thinner your sauce. Mincing in the Thermomix is amazing, but it takes a few trial runs. Play with it, and find what works for you.