And I would bet money on it, too.

Four adults and 1 toddler sat down to eat 4 lamb shanks – and here I was, thinking that was plenty for all of us. No way, no way! We could have easily gone through 2 more shanks; whether that would be healthy is a different question. But it was so delicious that none of us wanted to stop.

Let’s backtrack a little, and discuss the inspiration for this meal. I’m a part-time student, so this is my “break” and I’m spending lots of time cooking, reading about cooking, and watching cooking shows. As such, I have been working my way through a couple of masterchef masterclass DVDs. Drooling all the while, of course. In one masterclass, George Calombaris made this delicious-looking recipe – braised lamb shanks with yoghurt and mastic. Mastic is the beaded sap from a tree in Greece. As described during the masterclass, it tastes pine-y, vanilla-y and cinnamon-y… Hang on a second! I can recreate all those flavours with stuff I have on hand! No doubt mastic would be hard to find and expensive. So I figured I would give it a whirl using my pine needles to flavour it (and some cinnamon and vanilla, of course). The result was unbelievably amazing. 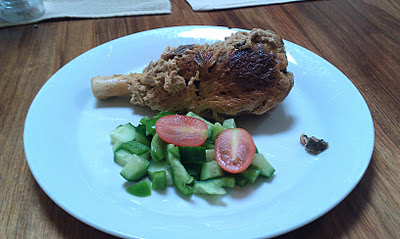 Yes, in case you were wondering – the smell was amazing, and everyone dug in before I could take a photo (yet again!). It’s the best I’ve got of the finished product. But look at that yoghurt-turned-cheesey-goodness on top! I’m drooling all over again!
Braised Lamb Shanks with Cinnamon-Vanilla Yoghurt and Pine Needles
Ingredients
3.5 cups yoghurt (I used sheeps milk yoghurt; if using cows milk, go for Greek style)
1 vanilla pod
1-2 teaspoons cinnamon (depends on your taste – I love cinnamon!!!)
4 lamb shanks
sea salt
dash of olive oil
2 tablespoons of apple cider vinegar (preferably organic, unfiltered – or no added sulphites/preservative, at least)
1 tablespoon TM stock paste
1.5 cups water (if you don’t have a thermomix, substitute this and the TM stock paste for 1.5 cups of vegetable stock)
2 tablespoons of honey
3 sprigs of pine needles (alternatively you could use rosemary or mint)
Method
1) Hang the yoghurt for at least 4 hours beforehand. If you have a thermomix, lay a tea towel over the flat varoma tray and leave over the sink, turning once halfway. If you don’t have a thermomix, use cheesecloth or one of those net bag thingys (can’t think of the name right now!) and tie the yoghurt up in that, suspended over a bowl.
2) Once the yoghurt has been hanging for 4 hours, tip it into a mixing bowl and stir through the cinnamon and the beans from the vanilla pod.
3) Trim the fat of the lamb shanks, season with salt, and caramelise briefly with a dash of olive oil in a frying pan (heat the oil on medium-high heat before putting the lamb shanks in the pan). Place lamb shanks in a casserole dish.
4) Mix together apple cider vinegar, stock paste and water and pour over lamb shanks.
5) Spread yoghurt mix over the top of the lamb shanks, and drizzle with honey.
6) Lay the pine needles (or rosemary/mint) on top, put a lid on the casserole dish and place in a preheated oven at 160 degrees for 4.5 hours, until the lamb is tender and basically drops off the bone.
7) Once lamb is cooked, remove pine needles and transfer lamb shanks to a serving dish (try to keep as much of the yoghurt-cheese on top of each shank as possible). Skim most of the fat off the sauce in the casserole dish. Transfer remaining sauce to a large saucepan or frying pan, turn heat up to high and reduce sauce, stirring, for about 5-10 minutes. Serve beside the lamb in a gravy boat.
8) Try not to eat it all at once!
This should serve 4 people. Maybe. Just make a huge salad. Or you could add an extra lamb shank (as long as it will fit in your casserole dish). If you add an extra lamb shank, I’d add another 1/2 cup to a cup of yoghurt, but you won’t need to increase any of the other ingredients. 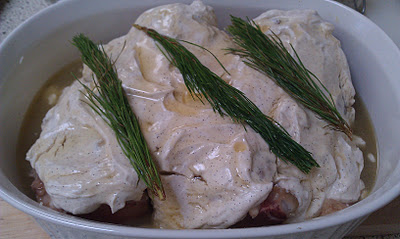 Just about to go in the oven… Just look at those vanilla beans!!! 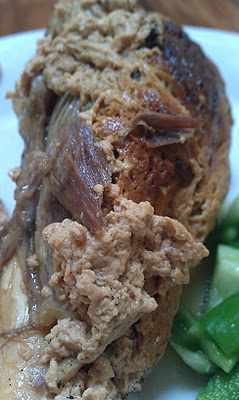 And the magical transformation from yoghurt into delicious, cheese-y goodness! Mmmmmmmm….
I hope you all try this soon – it’s so yummy! And if you’re in America – go out on a limb (pun totally intended) and try something new! You can get legs of lamb, and maybe shanks or shoulders by now, from Wegmans or Costco. You don’t need to change any of the proportions, but you will need to increase the cooking time to about 5 hours if you’re cooking a leg. When we lived in America, Australian lamb was actually cheaper in America than at home… Go figure!

Don’t forget to head over to the HHH facebook page for more food-related info, including links to articles and other wonderful blogs! I hope this week is full of delicious, healthy dinners for all of you! 🙂