It’s been a while since I posted any foods, so here goes…

I’ve made the executive decision (easy to do since I’m the only one with power to make such decisions – the rare perks of being a single mum!) that we are now what I like to call “gluten-reduced”. This means that, wherever feasible/possible, we will make GF recipes. I am aiming to only have gluten in bread, and even then it will not be every loaf. But this means that I have to find or create GF recipes. Consequently, we’re doing a lot of experimenting. So far: GF spaetzle (horrible failure), GF spinach pasta (semi-failure but actually turned out fine in a lasagne), GF bechamel sauce (semi-failure, but resurrected), GF choccie cake (success!), GF “fish fingers” (success!), GF pancakes (success). We’re averaging somewhere in the middle of success and failure, which I’m going to view as a good thing – at least we’re not averaging failure! 🙂 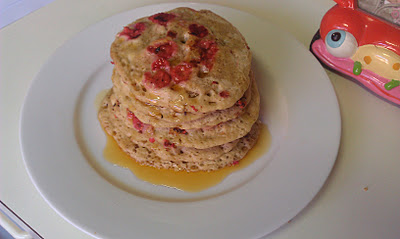 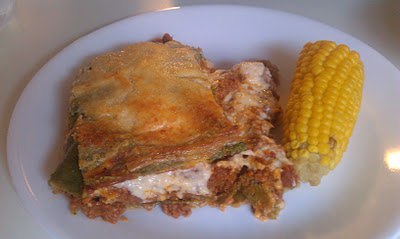 GF spinach pasta, GF bechamel sauce, bolognaise sauce and grated parmesan. Layered, obviously. The GF pasta recipe was a bit made-up-on-the-spot and consequently this resulted in the “semi-failure but actually turned out fine” result that I mentioned earlier. When I went to roll out the pasta dough, it was really difficult to work with – too much binding but at the same time not binding enough (that would be the lack of gluten talking!). Anyway, I persisted and shouted “for goodness sake, could you please just work already?” several times… And it worked, sort of. Some bits had little holes in them, but not a bad first attempt at all. I was unsure if they would cook properly as I had to stop at the 7th thickness setting on my pasta machine rather than going to 9 like I normally do for lasagne. But it was beautiful, the pasta sheets were pretty much perfectly cooked! Woohoo! They wouldn’t have worked at all for any other kind of pasta dish though, so the recipe still needs a lot of work. The bechamel sauce almost succumbed to gluten-free-failure too, but I managed to resurrect it. I used cornflour instead of regular flour to thicken it, and foolishly just substituted the same amount – an elementary cooking mistake, as cornflour is a much more effective and potent, if you will, thickener than plain flour. When I went to layer my lasagne, the bechamel sauce was bechamel jelly. Entirely unappetising, and completely unspreadable. Not to worry, I just whizzed it with some extra milk and it worked out fine.
Gluten: 1, Sarah: 3
GF “fish fingers”: 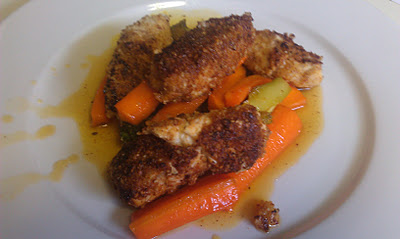 These are inverted-comma-fish-fingers because I just cut a flathead fillet into strips rather than trying to get them to resemble the stranger texture of frankenfood fish fingers. And the crumb? Dukkah! Almonds, hazelnuts and sesame seeds – dry roasted then crushed. I added paprika for myself, did plain dukkah for Mr T. Simply dipped the fish strips into beaten egg, then rolled in dukkah and pan-fried. In the future, I will use a more firm fish (over half of the fingers broke in half) and I might try baking them instead of frying. But the meal was DELICIOUS and at some point soon I will post the superb recipe for the veggies. They were scrumptious, and we both wanted to lick our plates at the end! Gluten: 1, Sarah: 4
GF chocolate cake: 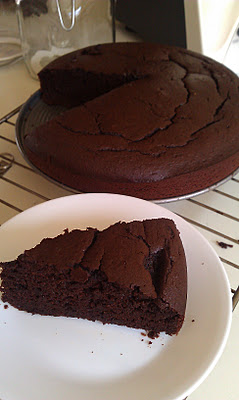 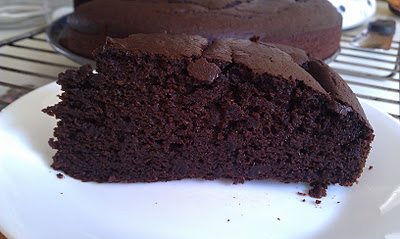 Wow!!! Quadruple-wow!!! This cake was a fair amount of prep for us, but SO worth it. Secret GF ingredient? You’ll never guess…………
…..
…..
Red kidney beans!!! No flour at all, not even cornflour.
I put the beans in water to soak overnight and then pre-cooked them for about 45 minutes in the morning (we don’t use canned foods, so I had to prep the dried beans in order to use them). We picked up great-grandma and brought her over to our place, then we could finally get around to the cake-making! Both great-grandma and I thought it was, hands down, the best chocolate cake that either of us had ever eaten. It was moist, chocolatey, sweet enough but not too sweet, and you couldn’t even tell there were beans in it. Mr T was too busy stuffing his face to comment on it, which is a comment in and of itself. Guilty as charged, I snuck a second piece after Mr T went to bed! 🙂
Gluten: 1, Sarah: 5
I can’t claim the recipe as my own though. It was dutifully posted on the thermomix recipe community by a fellow thermomixer. But I will eventually get around to posting a non-thermomix conversion of it.
So, we had one other GF attempt that I didn’t take photos of… GF spaetzle. I can tell this is going to be tough to do well. I made a dough, using tapioca starch and buckwheat & millet flours… It looked fine, and the spaetzle looked fine even as they were boiling away on the stove. But when I went to sautee them in butter as I normally do… They just turned into a goopy mess. I think I need to get some xanthan gum involved here. We’ll get there, though.
Gluten: 2, Sarah: 5
All in all, though… Not a bad attempt! Ahead of gluten by 3 points! (I may have been a little bias in my points-giving, but I would like to think that it accurately reflects the experiments thus far.)

And for dinner tonight (all GF, but I think these dishes would be GF no matter what, so they won’t count in my tally)… 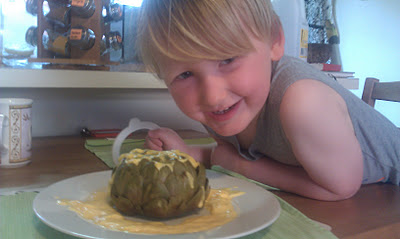 Mr T absolutely looooooved this! I was pleasantly surprised that he went for it. He doesn’t like “leaves” (i.e. lettuce), and this is very much just eating a plate full of leaves. But a) the sauce was awesome, and b) I think he found the whole scraping-the-flesh-off-with-your-teeth thing rather exciting!
Followed by baked cannelini beans: 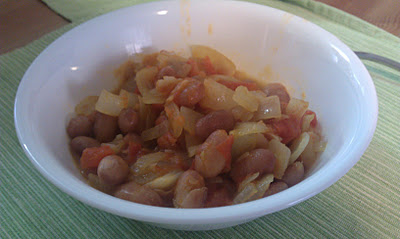 Another best-ever (my, it has been a tasty day!). These are the best baked beans I have ever eaten. Recipe will follow eventually.
I apologise for all these pictures and no recipes – I sort of have to prioritise my uni work at the moment, and I’m clearly not doing a good job by being on the blog anyway! Ahhhh well.
I hope you’re all staaaaarving now, and about to eat something nutritious AND delicious! 🙂
« Changes
Additive Free… Headache Free!!! »